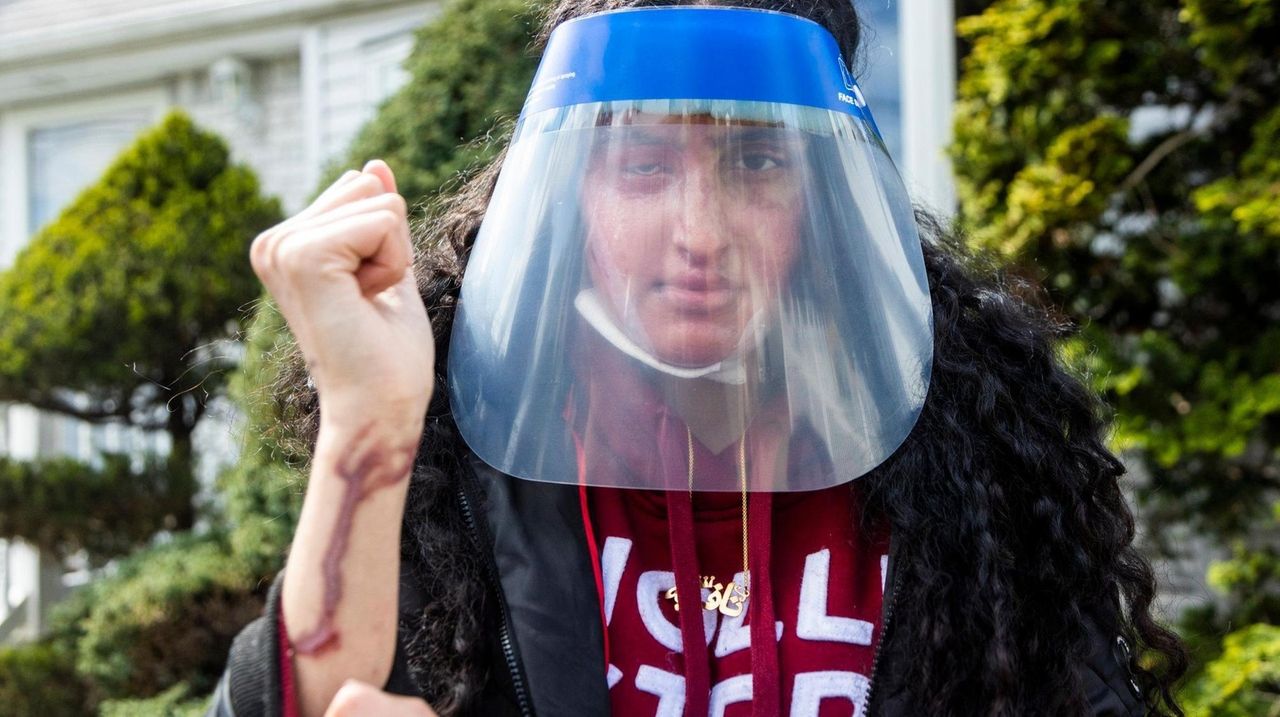 Nafiah Ikram, a 21-year-old survivor of a March 17 acid attack in Elmont, on Thursday said she has no idea who could have done it to her. She suffered burns to her face and arms, and can no longer see properly. Newsday's Cecilia Dowd reports. Credit: Howard Schnapp; Photo Credit: Ikram family, NCPD

A premed Hofstra University junior is healing mentally and physically from a March 17 acid attack in Elmont, which left her arms, face and eyes burned, she told Newsday.

Nafiah Ikram, 21, said in an interview she has difficulty with everyday activities such as eating or brushing her teeth, even after spending two weeks in the hospital.

"It physically hurts my face," said Ikram, wearing a face shield, outside her home on Thursday before going to a doctor's appointment. "As I heal, I’m being a little bit more and more grateful for the things I can do again that I used to before I got injured."

On the night of the attack, police said, Ikram parked on the street outside the Arlington Avenue home about 8:30 p.m. As she walked up the driveway, her assailant came up from behind her.

Ikram said she thought whatever was thrown at her was a prank, "like warm juice, room temperature."

"Then I just kind of screamed, gasped and that's I guess that’s when the acid got into my throat because I was taken aback," she said. "A few seconds later, my face started burning."

Ikram ran to her dad and said she was "panicking" that someone threw something in her face.

"He saw my face turn ash gray," she said. "He was screaming to call 911. My mom is in the bathroom, she rushed outside. They tried to help me take off clothes and they got burned as well because the acid was all over my coat."

The attack happened quickly, Ikram said, and she was glad the ambulance arrived because "by the time my parents were washing my face, it was very hard to breathe."

The reward for information leading to an arrest has been increased to $20,000, Nassau County Police Commissioner Patrick Ryder said in a news conference Thursday. Ryder described the suspect as a male, 6-foot-2 with a "skinny build," wearing a hooded black sweatshirt and gloves. A red 2013 to 2015 Nissan Altima with yellow New York license plates was seen on camera heading east on Arlington Avenue, Ryder said, and at multiple locations.

Ryder said police will put all their resources into capturing the assailant.

Meanwhile, the New York chapter of the Council on American-Islamic Relations has called for a hate crime probe into the attack, while U.S. Rep. Kathleen Rice (D-Garden City) is calling on the New York State Hate Crimes Task Force to help county police investigate the "vicious attack."

Since the attack, Ikram said, she has received support from friends she was in the Girl Scouts with when she was 10 years old.

Padma Lakshmi, host of the popular reality cooking show "Top Chef," has joined the call to help as she posted a video on Twitter asking for donations to a GoFundMe campaign, which had raised over $373,000 as of Thursday evening.

Ikram’s mother, Sherina Mohamed, said they’ve lived in the Elmont area for 17 years and they’ve never had issues with anyone.

Nafiah Ikram said she appreciates the outpouring of support and doesn't know who would do this to her.

"I was just living my life, minding my business," she said. "What could have provoked someone to do this to me? What could have gotten them so angry? I don’t know, but this is just inhumane."

Nassau police offer reward for info on acid attackPolice said the victim, a 21-year-old Hofstra University student, was doused in March with a liquid that caused serious injuries.