Good afternoon and welcome to The Point! It was quite an evening for the New York State Democrats, whose reunification Tuesday night could result in a 31-31 State Senate — with Simcha Felder of Brooklyn in the middle. Here’s the full picture.

Sen. Andrea Stewart-Cousins had an inkling that the political meeting to which she was invited at a Manhattan steakhouse on Tuesday would involve steps to unify State Senate Democrats.

But she was surprised by how quickly she was crowned supreme leader of the Democratic conference — smashing a glass ceiling in Albany, where decisions had always been made by three men in a room.

In another private room, at The Capital Grille on 42nd Street, Gov. Andrew M. Cuomo, Rep. Joe Crowley, state party leaders and about 10 of New York’s most powerful union heads spoke for more than an hour about taking back congressional seats held in New York by Republicans as well as taking over the State Senate to sweep its hold of state government.

Cynthia Nixon, a Cuomo challenger for the Democratic gubernatorial nod, was not really mentioned, but it was clear Cuomo was moving quickly to bring the Senate under his party’s control to blunt her criticism.

The Senate deal, which could propel the party to take over the chamber in November, if not sooner, was made after Cuomo turned to the Bronx’s Jeff Klein, leader of the eight-member breakaway Independent Democratic Conference, which caucused with Republicans.

In the fall, Democrats had reached a tentative deal with the IDC under which Stewart-Cousins would share the gavel with Klein as co-leader after this month’s special elections. In a dramatic moment Tuesday, Cuomo turned to Klein and said she should be the sole leader of Senate Democrats and Klein would be her deputy. Klein quickly replied, “Oh, that’s great.”

A Point source said, “Cuomo already had Klein lined up, the deal was done.”

As of Wednesday, Democrats have 29 seats (including the eight IDC members) and there are two vacancies in districts that will be decided in April 24 special elections. Democrats will hold on to the Bronx seat and their candidate for Westchester’s spot has a 10 percentage point lead, according to party polling. By the end of the month, there will be a 31-31 standoff with Simcha Felder of Brooklyn in the middle. (See more on Felder below.)

Witnesses to the wedding of mainline Dems and the IDC were Byron Brown, the mayor of Buffalo and chair of the New York State Democratic Committee; Christine Quinn, the party vice chair; Geoff Berman, the party’s executive director; Peter Ward, president of the New York Hotel and Motel Trades Council; and the leaders of other powerful unions, such as 1199, NYSUT and UFT, 32BJ, the Service Employees International Union, and the AFL-CIO.

So what happens next? The deal will be announced at a 4 p.m. news conference Wednesday with Cuomo, Stewart-Cousins and Klein, as well as Stewart-Cousins’ deputy leader, Mike Gianaris of Queens. While Gianaris remains in the leadership and stays on as chair of the Democratic Conference Campaign Committee, it’s unclear whether Klein will turn over the couple of million dollars he raised from both parties because he had a hand on the gavel the IDC shared with the GOP.

Other Democrats learned of the meeting during an 8:30 a.m. conference call Wednesday. Gianaris was the second person to speak on the call, and his remarks were described as magnanimous. “Don’t worry about me, I will be fine,” he told the group.

About those special elections

The deal also intensifies the focus on the April 24 special elections, which include two Senate seats.

The other race, for the Westchester seat vacated by Democrat George Latimer, now the Westchester County executive, is considered more competitive. But Democrats expect that Assemb. Shelley Mayer will prevail against Republican Julie Killian.

Two Democratic victories would produce a 31-31 tie in the Senate — plus Simcha Felder, a Brooklyn Democrat who caucuses with Republicans. And that would set the stage for a more-interesting-than-usual final two months of the legislative session.

A whole bunch of issues were not resolved during the budget process, from voting and ethics reforms to gun control, child sexual abuse victims, cash bail, plastic bags, food waste and more.

With fall elections looming and Democrats certain to retain their dominance in the Assembly, whatever happens — or, more tellingly, doesn’t happen — on these issues in the Senate will provide campaign grist for each party about why it needs to be in control.

And that will further animate races already expected to be hotly contested, like the Long Island rematch between GOP incumbent Sen. Carl Marcellino and Democratic challenger James Gaughran. In 2016, Marcellino won by 1.2 percent. 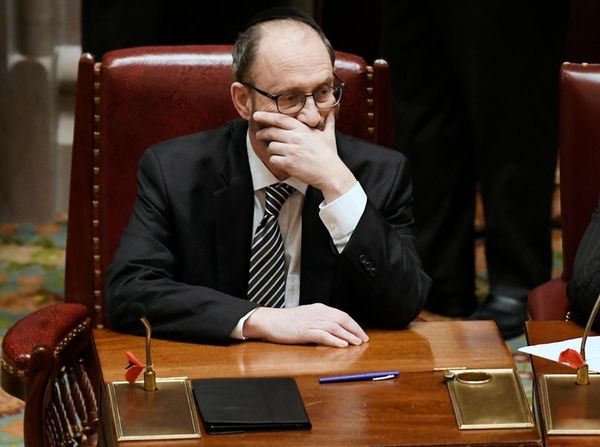 The man in the middle of the unity deal is Democratic Sen. Simcha Felder of Brooklyn.

Felder, who has run and won on both Democratic and Republican ballot lines, caucuses with the GOP and for now gives them their one-person majority in the Senate.

Post-budget and post-unity, what will Felder do to preserve his influence? He could, for example, hop back to Democrats should they sweep the specials. That would bypass the possibility that a blue wave in the fall sweeps more Democrats into the State Senate, making his loyalty meaningless. That would burn bridges, however, should the playing field stay even in the fall. Felder is a constituent-focused legislator popular with his Orthodox Jewish base, relentlessly focused on narrow issues affecting this group. That includes the issue that nearly led to a late budget: loosening restrictions on secular education in yeshivas.

And though he’s often seen as safe in his district, he does have a primary challenger: Democratic lawyer Blake Morris, a longtime Brooklynite and member of a group that has been increasingly harrying Felder about issues like Felder’s attempt for a higher speed limit to speed traffic on Ocean Parkway, which critics say is too dangerous.

Everyone’s handicapping Felder’s prospective wanderings, including majority leader John Flanagan, who indicated in a radio interview Tuesday that he thought Felder would stay put (he also thought the IDC was safe). In response to the news that the IDC was folding, Felder released a typically opaque statement: “I’m only loyal to G-d, my wife, my constituents and New Yorkers.”

But he did add something that should be alarming to Flanagan: “I don’t care about political parties and more and more New Yorkers feel the same way.”

Moving closer to a unified blue state government is another notch in the belt of Queens Rep. Joseph Crowley as he rises in the U.S. House leadership.

Crowley has been careful to allow Gov. Andrew M. Cuomo, as the state’s top Democrat, to take the lead in reconciling Senate Democrats. At the same time, a source close to the Queens congressman told The Point, Crowley has channeled pressure from the national party as well as powerful liberal unions.

In May, at Crowley’s urging, the 18 Democrats representing New York in the House signed a letter that called on State Sen. Simcha Felder and the eight members of the Independent Democratic Conference to abandon their alliance with the State Senate Republicans.

The following month, after attending a rally in Manhattan with Cuomo, House Minority Leader Nancy Pelosi added her voice to urge all New York State Democrats to work together, as did Keith Ellison, the Minnesota congressman and the Democratic Party’s deputy chairman.

The breakaway Democratic faction was not only a smirch on Crowley’s image as a leader, but locally the IDC also served as an embarrassment. State Sen. Jose Peralta, whose district overlaps significantly with Crowley’s 14th Congressional District, announced in January 2017 that he would join the dissident group. Peralta said the IDC had a better chance to advance policies. Another Queens Democrat, Sen. Tony Avella, had been an IDC member since 2014.

Peralta’s switch came the same month that Crowley was named chairman of the Democratic Caucus, the fourth-highest ranking position in House Democratic leadership.

Outraged by Peralta’s defection, and fired up by Trump administration policies, Queens Democrats organized a standing-room-only community town hall in June called “Where is Peralta?” Speakers referred to him as a traitor.

The following November, Crowley again allowed state Democrats to lead the way as he remained a considerable force in the room. He was one of four leaders to sign a letter to dissident Senate Democrats proposing a reunification plan. Other signatories included Cuomo’s hand-picked chairman and vice chairwoman of the state Democratic Party — Buffalo Mayor Byron Brown and former City Council Speaker Christine Quinn — as well as Crowley ally Hector Figueroa, president of the influential Local 32BJ of the Service Employees International Union.

This Kumbaya moment among New York Democrats demonstrates Crowley’s deft leadership while also presenting him with a stronger state party base to support his national rise.