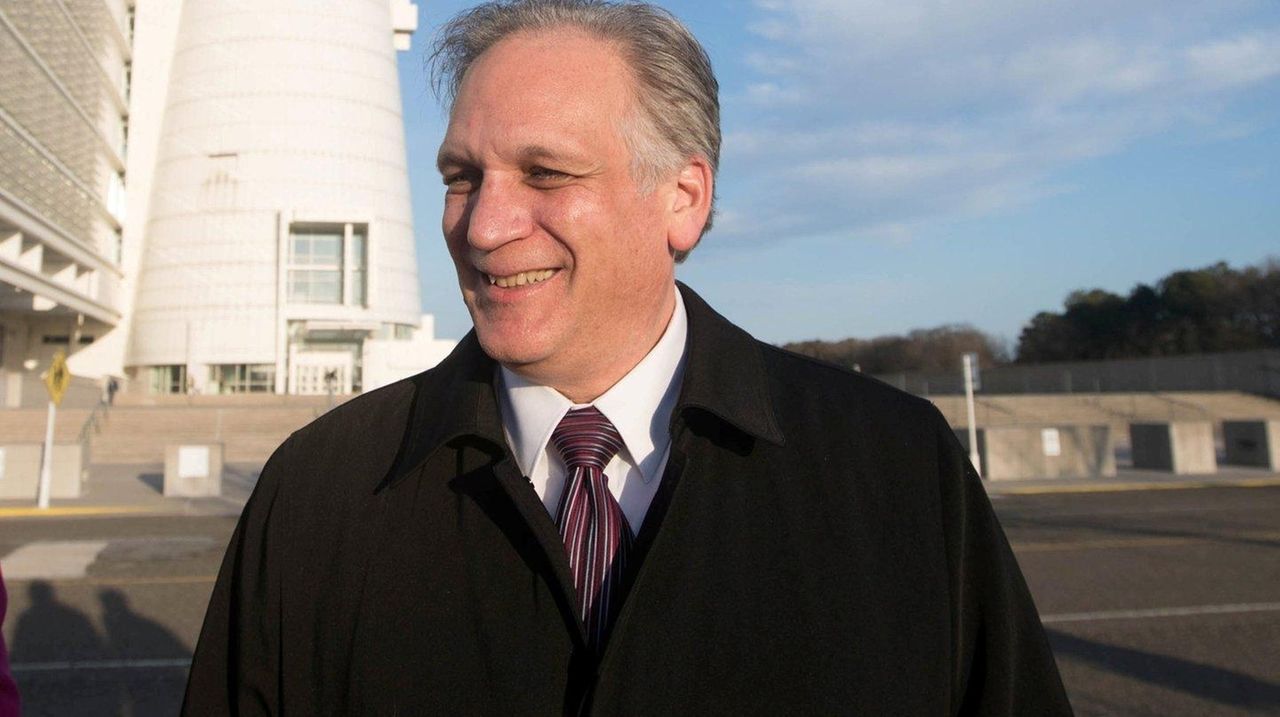 Former Nassau County Executive Edward Mangano was arrested and charged in federal court in Central Islip in October 2016 with conspiracy, bribery, wire fraud and extortion in an alleged scheme to award Mangano’s longtime friend and restaurateur Harendra Singh with county contracts worth hundreds of thousands of dollars to provide catering to county agencies in exchange for “bribes and kickbacks” including hotel and travel expenses, limousine services, free meals and other gifts for Mangano and his family, according to federal prosecutors. Some of the gifts Mangano allegedly received, according to prosecutors, were a $3,600 massage chair, a $3,300 ergonomic office chair, a $7,300 Panerai Luminor watch for one of his sons and the installation of hardwood flooring in his master bedroom.

Mangano, 55, of Bethpage, previously a part-time county legislator and "of counsel" to the Uniondale law firm Rivkin Radler, won the county executive seat in an upset in November 2009 and was re-elected in 2013. The two-term executive, a Republican, refused calls from members of his own party to step down after his indictment. Mangano, who pleaded not guilty, faces up to 20 years in prison. He has two children with wife, Linda. Mangano, who called the allegations “ridiculous” after his arrest, told reporters: “America’s the greatest country in the world. And you’ll have an opportunity to hear everything and decide for yourselves. God bless you.”

The wife of Edward Mangano and the editor and publisher of the Bethpage Tribune newspaper was arrested in October 2016 and charged with making false statements, conspiracy, and obstruction of justice under the same federal indictment as her husband. Prosecutors said Linda Mangano, 54, of Bethpage, received more than $450,000 from a no-show job provided by restaurateur Singh as a “food taster” from April 2010 — months after her husband took office — to August 2014, in exchange for county contracts for food services that her husband steered to Singh. Additionally, according to prosecutors, the Manganos received free lodging and travel expenses for multiple trips to the Caribbean and other locales, as well as other perks. She has pleaded not guilty.

While prosecutors allege Mangano, a Bethpage native and mother of two sons, did “little to no work” for Singh, in a series of interviews with the FBI in 2015, she described her work as doing the “fluffy pretty stuff” for Singh’s restaurants. Prosecutors said Linda Mangano provided “fabricated examples of work” she performed for Singh. Mangano described her 25-year relationship with Singh to prosecutors as “that of a brother and a sister” and said: “He loves me and I love him.”

The former Oyster Bay town supervisor was arrested in October 2016 and charged with conspiracy, bribery, making false statements, securities fraud, wire fraud and obstruction of justice in connection to allegations that he solicited and accepted bribes from restaurateur and former town concessionaire Singh in return for helping him obtain town guarantees on $20 million in indirect loans.

Venditto, 68, of North Massapequa, was later accused in a superseding indictment of 21 charges involving securities fraud in the town’s public offering of more than $1 billion in securities between 2010 and 2016. In a separate civil action, the U.S. Securities and Exchange Commission civil complaint charged Oyster Bay, and Venditto, with defrauding municipal bond investors by concealing more than $20 million in loans the town guaranteed indirectly for Singh. Venditto, a Republican who was sworn in as town supervisor on Jan. 6, 1998 and resigned in January 2017, has pleaded not guilty and faces up to 20 years in prison.

Singh, 59, of Laurel Hollow, who pleaded guilty to several counts of bribery and wire fraud counts in relation to allegations that he bribed a former deputy Oyster Bay Town attorney with $50,000 in order to help him get an “indirect” guarantee from the town on millions in loans. He was also charged with defrauding the Internal Revenue Service by failing to report millions of dollars in wages paid off-the-book, as well as cash paid by his restaurants’ customers. Singh, a 25-year friend to the Manganos, admitted buying gifts, such as chairs and a $7,300 watch for one of the Manganos’ sons, and paying for trips for the family, as well as allowing them to eat and drink at his restaurants for free, according to court papers. He also said he paid Linda Mangano $450,000, which did not require her to show up for work and where “no work product was expected from her.”

Frederick Mei, former deputy Oyster Bay Town attorney, secretly pleaded guilty in 2015 to a charge of honest services fraud in a scheme in which he received $50,000 in checks made out to cash, and payments on a $36,000 BMW lease in exchange for helping Singh obtain $32 million in indirect loan guarantees from the town for his business, including food concessions he ran at town beaches and a town golf course. Mei wore a wire for the FBI for several months in 2015, according to court papers. Mei resigned from his town job on Aug. 31, 2015.

Former Oyster Bay Town Attorney Leonard Genova was charged in March 2018 in a civil complaint by the U.S. Security and Exchange Commission with “defrauding investors” and violating securities law in connection with indirect town loan guarantees to Singh. Genova agreed recently to settle the charges. In a separate action, a federal judge issued an immunity order for Genova, requiring him to testify in the corruption case against Edward and Linda Mangano, and Venditto. Genova, of Massapequa, worked in Oyster Bay Town government from 1992 until January 2017, first as an assistant town attorney then as deputy supervisor and finally as town attorney

Kevin Keating is Edward Mangano’s attorney. Keating, who has offices in Garden City and Manhattan, has practiced law for more than 26 years, starting his career as a prosecutor in Manhattan. A graduate of Sienna College and Brooklyn Law School, he works as a defense attorney specializing in high-profile cases. Keating has practiced before the U.S. Supreme Court and also is qualified for what is known as a Learned Counsel to defend persons facing the death penalty.

John Carman, whose law practice is located in Garden City, is Linda Mangano’s attorney. A graduate of Colgate and St. John’s Law School, he is a former prosecutor with the Suffolk County district attorney’s office and a former associate of well-known Long Island defense attorney Stephen Scaring. Carman also takes on high-profile cases.

Marc Agnifilo is John Venditto’s attorney. Agnifilo is senior litigation counsel at the Manhattan law firm of Brafman & Associates. A graduate of Connecticut College and Brooklyn Law School, he is a former prosecutor in the Manhattan district attorney’s office and U.S. attorney’s office in New Jersey, specializing in organized crime and gang violence. He is an associate of high-profile Manhattan defense attorney Ben Brafman.

Assistant U.S. Attorney Lara Treinis Gatz, senior trial counsel at the U.S. attorney’s office, is prosecuting the corruption case against Edward and Linda Mangano and Venditto. A graduate of Ithaca College and Brooklyn Law School, she is a former assistant corporation counsel for the City of New York. At the Eastern District, Treinis Gatz specializes in political corruption and prescription drug crime.

Assistant U.S. Attorney Catherine M. Mirabile is prosecuting the corruption case against the Manganos and Venditto. She is a graduate of the University of Pennsylvania and Suffolk University Law School in Massachusetts and was a former assistant corporation counsel for New York City. At the U.S. attorney’s office, she has served as chief employment litigator for the civil division and has been assigned to the criminal division — specializing in political corruption.

Assistant U.S. Attorney Raymond Tierney is prosecuting the corruption case against former Edward and Linda Mangano and Venditto. Tierney is a graduate of Brown University, where he was on the football team. He also attended St. John’s University Law School. He is a longtime assistant Suffolk County assistant district attorney and assistant U.S. attorney specializing in political corruption and gang violence. He is one of three federal prosecutors who successfully tried MS-13 members for the killing of a 19-year-old and her 2-year-old son.

Didn't find what you were looking for?