Good afternoon and welcome to The Point! Click here to subscribe if someone sent this to you.

Point of No Return?

Did President Donald Trump “slut-shame” New York Sen. Kirsten Gillibrand in a tweet Tuesday, when he retaliated against her demand that he resign after allegations that he sexually abused women? While Twitter thought so, Gillibrand didn’t directly address that interpretation, tweeting along the lines of “You cannot silence me . . . ”

But Gillibrand’s fellow Democrat (and possible rival in a 2020 presidential primary) Elizabeth Warren went there. And now members of Congress are being chased down Capitol Hill corridors and asked whether the president made a disgusting sexual attack to denigrate the first high-profile woman to call for his resignation.

This is where our political conversation is right now. Read it for yourself below. 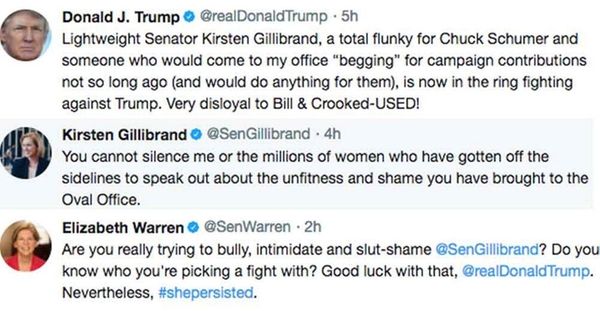 New York City’s first lady, Chirlane McCray, made a Broadway appearance on Sunday, presenting a proclamation to the hit show “Dear Evan Hansen” for its first year on the big stage.

The Tony Award-winning musical dramatizes the mental health struggles of young people, and as mental health has been a defining issue for McCray it may seem surprising that she hadn’t taken the Q train down to Times Square for a performance before.

McCray’s husband, Mayor Bill de Blasio, who was sick on Sunday, has weathered some gentle criticism that he doesn’t often go for the typical rah-rah-NYC appearances that tend to make mayors and their families a common sight at local functions, performances, and sites. In the run-up to re-election, for example, he made his very first visit to the High Line.

Regarding “Dear Evan Hansen,” “the production debuted scenes of the play at a Gracie Mansion Benefit dinner last year before it went to Broadway, so the First Lady has seen certain parts,” McCray’s press secretary, Dawnn Anderson, wrote in an email.

Well, she saw the rest of it this week. Maybe, as for many New Yorkers trying to see the Broadway smash, it was just too hard to get tickets.

The state Board of Regents voted Tuesday morning to adopt “the most current national standards” for school principal preparation. “Current” is apparently a relative term if you’re a Regent. The board embraced standards completed more than two years ago: the “2015 Professional Standards for Education Leaders.”

So it’s no surprise that some Long Island parent activists refer to the Education Department as “Dreamland.” These parents have been traveling to Albany for two years to advocate for lowering diploma standards for some special education students who can’t pass Regents exams, because of a learning disability.

“They say, ‘it’s so dreamy in dreamland’,” state Sen. Todd Kaminsky, who has joined them in this quest, told The Point.

For a parent whose child could be forced to leave school without the sheepskin that is its own reward as well as a signal to the military and employers that these graduates have real competencies, the issue has been frantically urgent.

On Monday, a Regents committee finally voted, unanimously, in favor of a “superintendent’s waiver” for some of these students.